"What's Wrong With Norman" is the third episode of the first season of Bates Motel. It aired on April 1, 2013.

Dylan learns there is more to his new job than he originally thought; Emma and Norman make a shocking discovery.

Dylan states he has a new job, not mentioning it's guarding the large marijuana field that was discovered. Norman passes out in the classroom while seeing images of his teacher, Miss Watson tied up somewhere. During these flashes there is also a glimpse of Norma tied up in the same way. At the hospital, the doctor wants to keep Norman overnight for further observation. Norma has to leave the hospital to receive the new carpeting for the motel.

nWhile at home, Sheriff Romero presents a search warrant, looking for evidence relating to Keith Summers' disappearance. Bradley shows up at the hospital bringing Norman a plant, simply returing him the favor and thanking him for visiting her father during such a hard moment for her. She then decides to join him In watching an old movie while sitting next to him in his hospital bed. They bond over the similar loss of their father figure. Norma leaves home with the sheriff and deputies still searching and returns to the hospital. Against the doctor's wishes, she takes Norman home.

After returning home, Norman tells Norma that he kept Summers' utility belt which is now missing. Norma tracks down Deputy Shelby. He tells her not to worry and assures her everything will be alright as he then invites her to his house for dinner. Emma arrives at Normans house where Norman explains that he is not feeling well. But Emma is persistent and convinces Norman that they should continue their investigation on the young Chinese woman, so her life is not forgotten about. They both go back to motel room 4 where Norman found the sketchbook to begin with. Emma explains that the previous owner of the motel Keith Summers was not a pleasant man to say the least, and was most definitely not a man you would want to be stuck with in an elevator.

nNorman receives a text from Bradley jokingly stating they share custody on the plant she gave to him when in the hospital. After a further investigation Emma and Norman find a Chinese enscripture under the sink in the motel room. Later, Dylan has another talk with Norman who again claims that Norma is smothering him. Dylan offers his advice, and let's Norman know that he should explore the world around him, and tells him to 'get out more'. Dylan then apologizes for Norman trying to 'kill him' with a meat tenderizer. Norman, appearing to have no remembrance of the event, then apologized to Dylan, still not believing him, but still led to Dylan forgiving him, in which case they both laugh it off. Norma has dinner with Deputy Shelby at his home. Shelby reveals that he took Keith Summers' belt without the Sheriffs' knowledge because he wants to protect and care for her, which results in them making out.

Feeling safe, Norma back at home tells Norman what Deputy Shelby proposed to her as Norman claims that he may just be using her. At school, Emma tells Norman her interest in finding out more about the women depicted in the sketchbook he found by informing the police but Norman advises her not to. Then while in bed, Norman sees a image of Norma beside him advising him to go search for Summers' belt at Deputy Shelby's house. While searching for the belt, Norman discovers locked in the Deputy's basement one of the women depicted in the sketchbook. 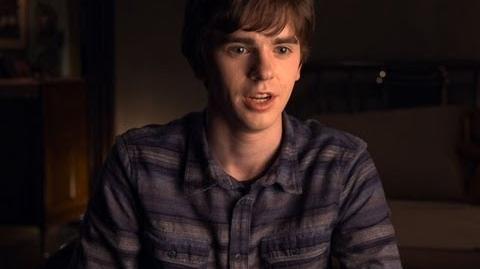 Bates Motel Inside The Episode What's Wrong With Norman (S1, E3)
Add a photo to this gallery

Retrieved from "https://batesmotel.fandom.com/wiki/What%27s_Wrong_With_Norman?oldid=29124"
Community content is available under CC-BY-SA unless otherwise noted.