As the Bates Motel welcomes its first guest, Norman learns that even popular girls come with many complications.

Romero arrives at the motel, and takes the smoking gun away from Dylan; however, instead of arresting him, he leads Norma, Norman, and Dylan into the house to ask them what happened. Norma tells him the full story of everything that went on since they moved in, while Romero patches up Dylan's arm wound. Romero mysteriously decides to change the story and tells them that they are not to tell anyone what really happened. Instead, his version will go on the record: he caught and killed Shelby in a gunfight when Dylan had actually done it. Norma is relieved, but Dylan is frustrated that he won't get any credit for killing Shelby. The next morning Norman has vivid dreams of him and Bradley sleeping together in his bedroom, showing that he does want to continue an intimate relationship with her. She worries that Norma will hear but he reassures her saying to, "trust me ". They continue for a few moments until interrupted by Norma opening the door asking what Norman is doing. That is when it is revealed to be a dream, a rather interesting dream as we see Norman make some "adjustments" under the covers while Norma opens the curtains, admiring the birds. They continue a casual conversation.

Dylan informs Norma that when his arm heals, he is going to move into the house that he bought, and still wants Norman to come with him. Outside, he meets Jake Abernathy, who asks where Keith Summers is. Dylan informs him that Keith is dead, and Jake drives away. Jake later tries to get into the motel, but can not due to not having a key. Norma says that the motel is still under renovation, but she can give him the key and let him be the first guest if he doesn't mind the renovation. He accepts.

Emma wants to see Norman, but he asks Norma to tell her that he isn't feeling well. Norma eventually gives in and tells a disappointed Emma, but decides to take Emma on a car ride with her to cheer her up. Emma mentions Bradley to Norma, causing Norma in a panic to ask for more information. Emma tells Norma about Bradley, but Norma assumes that Emma is overreacting and says, "She's a teenage girl, she can't really be all that". Emma says that Bradley has a yoga class in town that day, and Norma decides to go and watch to see if Emma truly was overreacting. She is shocked to see that Bradley is the same girl who showed up at the door one day asking for Norman, and has a mental image of Bradley and Norman having sex with one another. She hires Emma to work at the motel.

Norman finds a stray dog and names it "Juno", growing close to it very quickly. Norma and Norman talk about dogs before the conversation turns more serious. Norman angrily leaves and goes to Bradley's house, where Bradley tells him that they aren't a couple and that she doesn't "feel that way" about him. Rage clearly swells up inside him, and he runs off, but Bradley runs after him and embraces him in a hug. He goes home, and is devastated to see Juno be hit by a car. Norma tries to comfort him, but he tells her to go to Emma's house, as her father, Will Decody, is a taxidermist. Norma agrees after a moment and runs to the car, while Norman cradles a dead Juno in his arms, crying. 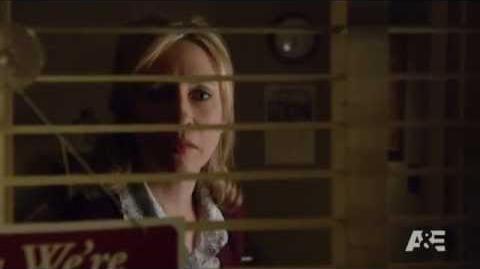 Bates Motel Inside The Episode The Man In Number 9 (S1, E7)

Retrieved from "https://batesmotel.fandom.com/wiki/The_Man_in_Number_9?oldid=32868"
Community content is available under CC-BY-SA unless otherwise noted.