"The Body" is the eighth episode of the final season of Bates Motel and the first to be directed by Freddie Highmore. It aired on April 10, 2017.

As Norman sits in a daze in the living room, the sheriff attempts to question him about the phone call he made. He sees "Mother" approaching but when he shuts his eyes and opens them again, "she" is gone. He is adamant that he be given his meds, fearing that "Mother" will return, and the sheriff tells him he will be given them when he is down at the station. As Dylan is being tended to by a paramedic, he sees Norman being led from the house and runs after him. When Norman gets into the police car, Dylan promises him that he will find him an attorney.

At the police station as Norman is questioned he pinpoints the location of the well where he says Sam's body was dumped but the sheriff believes he is making everything up just for attention. As he returns to his cell and takes his meds, "Mother" emerges and viciously attacks him for saving Dylan from "her" wrath, insisting that "she" should be the only one that matters in his life. Forcing him to throw up his meds in the toilet, "she" then apologizes to him before bashing his head on the toilet, knocking him out. When the sheriff returns, "Mother" has taken control of Norman's body and when asked how everything is, "she" responds that everything is "peachy keen".

Meanwhile, Chick shows up at the motel and is horrified to find a crime scene. A female cop questions why he is there and he shows her a dead raccoon, saying that Norman is a taxidermist. He is relieved when he learns that Norman is only down at the police station. Elsewhere, Dylan hires a no-nonsense attorney called Julia Ramos to represent Norman, having learned of her from Remo. He insists that Norman be placed in a mental facility and sends her to meet with Norman. However, when Julia arrives at the police station, "Mother" is still in control of Norman but Julia says that there is the tiny problem of him having confessed to the murder. "Mother," says that "she" was not on her meds and was not aware of what was going on. Julia says that they'll just claim it was a psychotic break but Norman has already told the police where the body was dumped. She also mentions that he would have to explain why he lied about being the murderer. "Mother" asks why someone would lie about something like that and Julia responds that someone else would have to have killed Sam. "Mother" gives a little smile.

As "Mother" undergoes more questioning, "she" claims that Norman fell desperately in love with Sam's widow Madeleine. "She" says that Madeleine reminded him of Norma and reveals all about Sam's affair but changes the story to say that when Madeleine found out about the affair she returned to town alone and revealed that he was dead, mentioning something about a well, and kissed Norman before he offered to take the blame for the incident. "Mother" says that looking back he may have been an easy target as he was always so naive about beautiful women.

The sheriff calls in Madeleine for questioning and Madeleine says that she and Norman became friends. The sheriff says that he confessed to Sam's murder even though there is no concrete evidence that he is dead. She asks why he would make such a claim and Madeleine responds that he just liked her store. The sheriff reveals to Madeleine that Norman appears to have been infatuated with her, asking if there is any basis for that. As Madeleine leaves the police station, she attempts to phone Sam but the call goes directly through to voicemail. She glances back through the doors where she comes face-to-face with "Mother" leering at her through the glass.

Meanwhile, Dylan has booked into a motel for the night and phones Emma to tell her about Norman, also explaining that the attorney he hired was expensive. After an identification on the second body pulled from the lake has been made the sheriff visits him with the confirmation that it belongs to Audrey Ellis and figures he will want to tell Emma. Even though she knows he wants to protect Norman, she asks him to consider working with them but Dylan simply bids her goodnight.

At Maggie Summers' house, Romero finally finds his gun while she is sleeping and heads straight back to the Bates house. When he arrives the place is deserted and he lets himself in, unaware of Norman's current predicament. He sees Norma's ghost on the stairs and follows it, seeing the empty space in the hallway where he attempted to revive her with CPR. He sees her ghost again at her dressing table before falling asleep on her bed. He is awoken some time later by the sound of Norman's voice and follows it downstairs to the basement where he finds Chick sitting in the freezer, typing away on his typewriter and listening to a tape recorder. Asked why he is there, Chick tries to explain how he became close to Norman, revealing that Norman dug up her corpse following her death and converted the freezer into a shrine. He says that he is writing a true crime novel and that it has more intrigue and surprises than any scripted drama. Suddenly, Romero downs him with a single bullet through the head.

As Norman sits in the interrogation room, "Mother" tells him to be patient as police and cadaver dogs are seen walking through the snowy woods. They come across the well Norman mentioned and remove a body covered in plastic - that of Sam Loomis. As "Mother" mumbles that "she" told Norman "she" would take care of everything, the sheriff, who has returned from the crime scene, enters the interrogation room and informs Norman that he is being additionally charged with the murders of Jim Blackwell and Audrey Ellis. 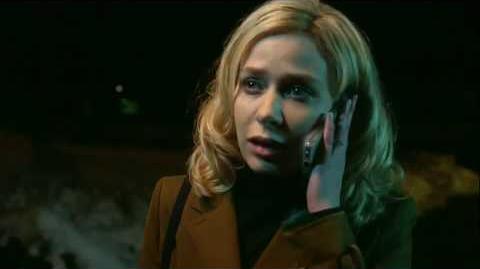 Retrieved from "https://batesmotel.fandom.com/wiki/The_Body?oldid=30817"
Community content is available under CC-BY-SA unless otherwise noted.