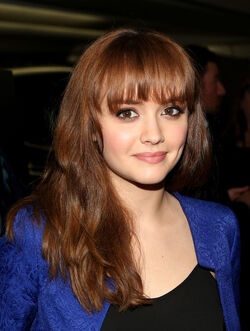 Olivia was born in Oldham, Greater Manchester in the north of England on December 27, 1993.

She trained at the prestigious Oldham Theatre School and on graduating won the major supporting role of Meg in Blackout, a mini series produced by Red Productions for the BBC directed by Tom Green.

She followed this up with the lead role of Harper, starring alongside Sam Claflin and Jared Harris, in The Quiet Ones directed by John Pogue for Hammer Films and shot in the UK. She then went on to play the leading role of Nancy, a young teacher in the 1940's caught up in the world of a tyrannical children's home, in the BBC's three-part primetime, supernatural drama The Secret of Crickley Hall.

Retrieved from "https://batesmotel.fandom.com/wiki/Olivia_Cooke?oldid=28996"
Community content is available under CC-BY-SA unless otherwise noted.