"Norma Louise" is the sixth episode of the third season of Bates Motel. It aired on April 13, 2015.

6:24pm: Freaking out, Norman thrashes the kitchen, hurling items at Dylan, who's trying to calm him down. Norman hits him, telling him it's all his fault that Norma's gone and Dylan punches him, knocking him out.

6:31pm: Driving on the open road with tears in her eyes, Norma's phone goes off before she pulls over to the roadside and checks it, noticing a missed call and several messages from Dylan, informing her that Norman is freaking out and she needs to come home. Norma gets out of the car, drops the phone on the ground and shoots it. Meanwhile, Romero is seen buying groceries at the supermarket. As he heads back to his van, a car tails him from behind and as he puts his groceries in a bullet shatters the window as another hits him in the chest. He collapses to the ground.

8:45pm: Norma arrives in Portland and heads into a boutique, selecting clothes to try on while acting rudely to an assistant. Dylan leaves another voicemail telling her to come home, and when he hangs up, he reassures Norman that she will be home. Emma drops by and Dylan reveals that he told Norma about Caleb and now she's gone. Emma offers to stay with them.

9:55pm: Romero awakens in the hospital and a nurse informs him that he was shot. He tells her to hand him his phone and he rings Norma to warn her that she's in danger.

As Norma leaves the boutique dressed in the clothes she's bought, she's being followed by another car, She goes to a showroom to trade in her car and then heads to a motel, where she books a room. She collapses on the bed and has a recollection of hiding underneath the balcony of her childhood home, listening to her parents fight as Caleb comforts her. In his room, Norman calls out for his mother and heads towards her room, where he finds butterflies fluttering within and the walls cracking. He then awakens in his own bed.

12:00am: Dylan calls to Caleb's van and tells him that he came clean to Norma and that Caleb has to leave. Caleb says he understands.

Meanwhile, Norma heads to a bar where she meets a young man and tells him she ran out on her wedding. They dance and she admits to being married before and he died. They go to his truck and when he tries to force her to engage in intercourse, she spits at him and gets out of the truck. Back at the Bates home, Norman is down in the basement working on a dead magpie as Juno barks from the stairs. Norman rebukes him as the magpie starts to flap its wings so Norman snaps its neck.

2:12am: Dylan and Emma discover Norman in a fugue state and are extremely worried. Elsewhere, Norma contacts James to ask if she could call by his house to chat to him. Dylan and Emma follow Norman, who wants his mother, upstairs and Emma suggests putting him to bed in Norma's room. When she has a coughing fit, she asks Dylan to help by hitting her chest. Emma reassures him everything will be okay.

Norma arrives at James's house as the car that was following her is seen across the street. Marcus Young calls by the hospital to talk to Romero and tells him he should have got Norma to hand over the flash drive, but says he could get Bob Paris off his back if Romero tells him he's working for Marcus. Marcus says that he still intends on being sheriff. Romero says he'll think about the offer but when Marcus returns to his car, suddenly the driver's side window is smashed and he's shot dead by Romero, who climbs into the driver's seat and drives off.

2:36am: As Norma sits in James' kitchen, she soon comes clean about Norman and parts of her past. Realizing she may have said too much, she tries to leave but James grabs her and carries her upstairs to his room. She tries to kiss him, but he says he could lose his job before she kisses him again and he doesn't pull away.

Several hours later, Dylan is awoken by rattling noises coming from the kitchen. Going to investigate, he sees Norman at the stove dressed in Norma's nightgown preparing breakfast. 'Norma' tells a clearly confused Dylan to wake his brother up so that he can eat and resumes cooking.

7:15am: Norman is fast asleep in Norma's bed and Emma tells Dylan she's going home to shower. When she leaves, Dylan lies down on the bed beside Norman and falls asleep. Meanwhile, having spent the night together, Norma tells James that she has to go. Chick finds Caleb by the lakeside and reminds him to consider his offer.

Norma returns home to find Dylan and Norman asleep on her bed and wakes them up. They drive to where Caleb is and when he emerges from his van, Norma turns to leave, before Caleb grabs her and collapses at her feet, crying and apologizing for what he's done. After a minute, she starts hugging him and crying. Dylan and Norman look at them but the latter is none too pleased. 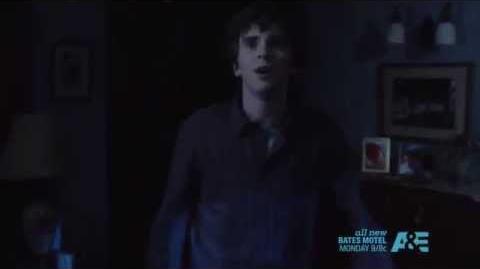 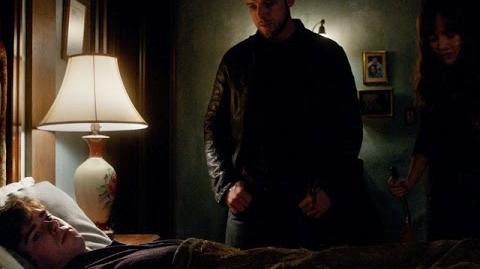 Bates Motel Dylan and Emma Have a Connection 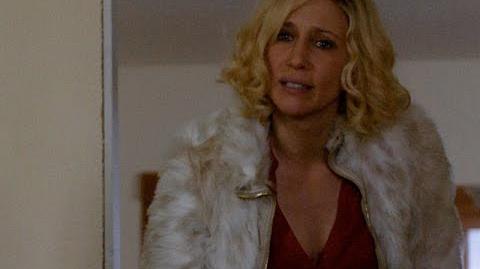 Retrieved from "https://batesmotel.fandom.com/wiki/Norma_Louise?oldid=32870"
Community content is available under CC-BY-SA unless otherwise noted.