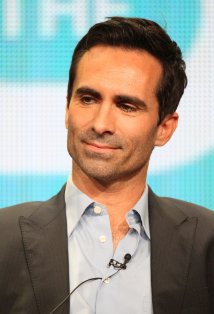 Carbonell was born in New York City. He is of Cuban and Spanish descent. He was raised Catholic. His family moved to Caracas, Venezuela, where he attended The British School Caracas. Later on, he moved back to the United States, where he attended Deerfield Academy (with future Lost co-star Matthew Fox). He earned a B.A. in English at Harvard University in the late 1980s.

His father is a business executive and is active in the Cuban community. Former professional baseball player Rafael Palmeiro is his cousin. His great-grandfather, José Manuel Cortina y Garcia, was one of Cuba's most outstanding orators and diplomats.

Carbonell is married to actress Shannon Kenny. They originally met while both working as regulars on the 1995 television series Muscle. The couple has two children, Rafael (born 2002) and Marco (born 2005).

He is a practising Roman Catholic.

Carbonell's dark eyelashes have been the topic of discussion, but interviews with both Carbonell and the producers of Lost have made it clear they are not enhanced by any form of makeup. A short skit during the Lost panel at San Diego Comic-Con 2009 featured Carbonell allegedly applying eyeliner before throwing a Christian Bale-esque rant upon receiving the wrong color makeup from an assistant. In addition, in the Psych episode "Shawn 2.0", Shawn makes a comment about Nestor's character as having "impossibly dark eyelashes."

He is fluent in Spanish, a fact put to use in the sixth season episode of Lost, "Ab Aeterno", in which numerous scenes contain dialogue mostly or solely in Spanish. He also did a Spanish-language beer commercial.

Retrieved from "https://batesmotel.fandom.com/wiki/Nestor_Carbonell?oldid=28805"
Community content is available under CC-BY-SA unless otherwise noted.