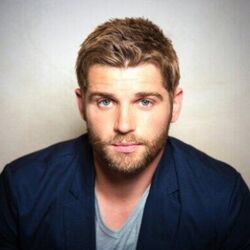 Vogel was born in Abington Township, Montgomery County, Pennsylvania and raised in Warminster Township, Pennsylvania; both of his grandfathers fought in World War II, with one being a tank commander and fighting in the Battle of the Bulge, and the other being a Seabee in the Navy. Vogel has two younger siblings: a brother, Daniel Aaron, and a sister, Kristin. Vogel attended William Tennent High School, the same high school as Sprint spokesman Brian Baker and boxer Kermit Cintron, where Vogel was on the Freshman wrestling team. During the early 2000s, he frequently traveled to New York City in order to audition for acting roles and modeling slots.

Retrieved from "https://batesmotel.fandom.com/wiki/Mike_Vogel?oldid=28712"
Community content is available under CC-BY-SA unless otherwise noted.