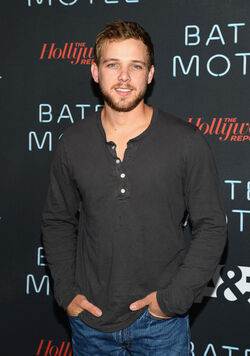 Maximillion Drake Thieriot was born in Los Altos Hills, California, the son of Bridgit (née Snyder) and George Cameron Thieriot. He has a sister Frances and a brother Aidan.  Thieriot was raised in Occidental, California and divides his time between his home in Northern California and Los Angeles. He graduated middle school from Sonoma Country Day School in 2002, and graduated in 2006 from El Molino High School. Thieriot enjoys hunting, basketball, wrestling, surfing, snowboarding, and other sports in his spare time. He has described himself as a "small town farmboy in general".

Thieriot's family once owned the San Francisco Chronicle; his great-great-grandfather, M. H. de Young, who was of Dutch Jewish descent, co-founded the paper, and his relatives, Charles and Richard Thieriot, were the editors and publishers of the paper. Thieriot's paternal grandparents, Ferdinand and Frances Thieriot, died in the sinking of the SS Andrea Doria.

Thieriot married his girlfriend of eight years, Lexi Murphy, on 1 June 2013[1]; the couple got engaged in (reported March) 2013 after seven years of dating.[2] In December 2015, they welcomed their first child, a son named Beaux. [3]

Retrieved from "https://batesmotel.fandom.com/wiki/Max_Thieriot?oldid=28854"
Community content is available under CC-BY-SA unless otherwise noted.