A special guest checks into the motel; Dylan grapples with devastating news; Sam and Madeleine's marriage reaches a crossroads.

Marion approaches the motel office to find it locked and when she looks at the house she sees movement before Norman comes down the steps to greet her. She asks for a room and signs the guest register using the name Marie Samuels and Norman gives her the room for $60. She tells him she is in town to go hiking with her boyfriend. He gives her the key to Room #1 and brings in her suitcase. When she asks if there is a diner where she can get food he tells her that the town is small and nowhere will be open but offers to make her a sandwich.

He goes up to the kitchen to make the sandwich where "Mother" voices "her" disapproval of their new guest but Norman points out how "she" has been going out to the bar so often. "She" tells him "she" tidied up the kitchen and he asks what kind of game they're playing. As "she" continues to push him, he stands his ground, repeating that "she" does not exist. "Mother" says he cannot outmaneuver "her" and he says he will prove that he can as he takes the sandwich down to Marion.

As they eat together, Marion notices his taxidermy and he tells her he loves stuffing things. Norman reveals that he is unmarried but has a mother and adds that it is hard to be lonely but it is also hard to love people as it can feel like a trap. After Marion reveals parts of her past, her phone rings and she excuses herself back to her room to take the call. It is from Sam, who is hiding in the bathroom while Madeleine is screaming at him from outside. When Marion asks who is on the other end of the line, Sam dodges the question by saying he is with a work colleague. She tells him to come to her and after he hangs up she leaves a voicemail for him.

She then decides to have a shower and as she undresses Norman can be seen spying on her via a peephole in the motel office located behind a picture frame in her room. "Mother" tells him that "she" this is the reason he needs "her" there as Marion gets into the shower. However, she cuts her shower short and heads to the motel office to ask Norman if he has Sam's home address, since he is her boyfriend. Norman says his address is not in the book and suggests calling him again before revealing that he knows Sam's wife. Marion does not believe him and decides to drive to the address Norman gives her, only to discover Sam and Madeleine having a blazing row. Realizing Norman was right, she takes a tire iron from her trunk and smashes the windows in his car. Sam hears the commotion and runs outside but Marion drives off and he ends up with a glass of wine in his face courtesy of Madeleine who has witnessed the scene. She storms back into the house and locks him out.

Meanwhile, Dylan returns home to Emma and she reveals to him that she was looking up information on the motel when she stumbled upon an article that said Norma committed suicide. Dylan is furious when he rings Norman, who says that he did not say anything since it was too painful but Dylan knows Norma would never kill herself.

As Dylan hangs up, "Mother" calls Norman for dinner but when he turns around again "she" is not there. He goes into the kitchen to find the table fully laid and tells "Mother" that "she" is not real as he heads for the refrigerator to prepare his own dinner. They end up having a blazing row when Norman says he is starting to have some clarity and he argues that "she" does not exist even though "she" tries to pry his eyes open so that he can look at "her". "She" asks him what is wrong and he tells "her" to stop acting like Norma. "Mother" tells him to repeat to himself that "she" is real but although he says he made "her" up he eventually gives in and says that "she" is real as he stands in an empty, messy kitchen since "Mother" has thrown the dinner everywhere.

Norman heads back down to the office and notices Marion is back. Hearing a crash from her room, he finds that she has broken a lamp, which she promises to pay for. She is preparing to leave and laments that she is an idiot for believing that Sam was a good person. Norman sits down on the bed beside her as cries on his shoulder. He tells her she needs to leave as she cannot be "that person". He packs her stuff up and tells her to get out of there as fast as she can, ordering her to get rid of her car. As she leaves, she hugs him. While she speeds away, she throws her cellphone out the window.

As Norman fixes the broken lamp, "Mother" tells him how he let Marion get away and when Norman hears a car pull into the courtyard he sees that it is Sam, who has shown up to make amends with Marion. He tries to get in contact with Marion, telling her that he is waiting at the motel. "Mother" tells Norman that Sam is just like his father - a self-centered asshole - and Norman lived in fear of his father, ultimately creating his "Mother" persona. "She" tells him they are two parts of the same person and "she" killed his father since he could not and now Sam should meet a similar fate. Taking a butcher's knife, Norman heads to Room #1 where Sam is showering and yanking back the shower curtains catches him off guard, stabbing him repeatedly. As Sam falls, he grabs onto the shower curtain and pulls it to the ground. As a bloodied Norman sees what he has done, he says "Oh Mother, what have I done?" 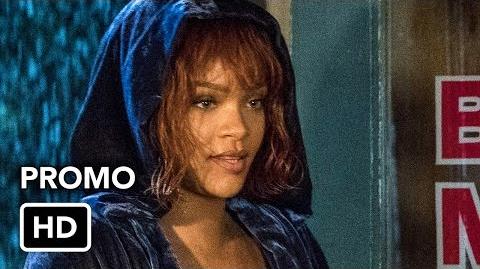 Retrieved from "https://batesmotel.fandom.com/wiki/Marion?oldid=30774"
Community content is available under CC-BY-SA unless otherwise noted.