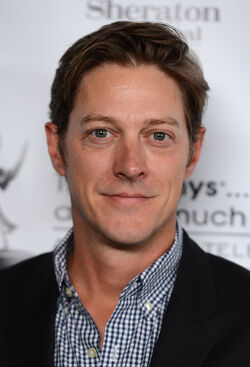 Kevin Rahm is an American actor who portrayed Bob Paris on Bates Motel.

Rahm was born in Mineral Wells, Texas. While a member of The Church of Jesus Christ of Latter-day Saints (LDS Church), he served as a missionary in France, Switzerland, and on the islands of Mauritius and Réunion between 1990-92. After returning to the U.S. he studied pre-law at Brigham Young University], before changing his major to drama. In 1994, he was awarded the Irene Ryan Award for best college actor, and in 1996 dropped out of university to pursue an acting career in Hollywood.

Rahm played Kyle McCarty, Amy Gray's cousin, for 3 seasons on "Judging Amy". He joined the show in season 3, when Dan Futterman left the show. He also played Norvo Tigan, the brother of Nicole de Boer's character of Ezri Dax, in the Star Trek: Deep Space Nine episode, "Prodigal Daughter"; "psychic-guy" patient Mr. Duff in the Grey's Anatomy episode, "Save Me"; the driver in the 2001 VW Jetta ad, "Big Day"; and the groom in the Apple iDVD ad, "Elope". He also appeared in "Scrubs" as a patient.

In September 2006, Rahm guest-starred in the two-part 7th season premiere of CSI: Crime Scene Investigation. On October 21, 2007, he made his first appearance as Lee McDermott, a new Wisteria Lane resident on ABC's "Desperate Housewives", who is gay and has a husband, Bob Hunter (played by Tuc Watkins).

Rahm guest-starred on "Friends" as Tim, Monica's inexperienced sous-chef, in "The One with Rachel's Date" in Season 8; had a recurring role on AMC's "Mad Men" as Ted Chaough, from rival firm CGC; played car salesman Brad Elias on CBS' "The Mentalist"; and played Jack, Annie's ex-brother-in-law and crush, on Fox's "I Hate My Teenage Daughter".

In 2014, Rahm played a newsroom editor in the movie "Nightcrawler". In March 2015, Rahm played a management consultant (Michael Barnow) to the Secretary of State in the TV show "Madam Secretary".

Rahm married Amy Lonkar, a cardio-thoracic surgeon at the University of Southern California, on April 28, 2012, on a soundstage in Burbank, California. Their first child, a daughter, was born on September 13, 2014. He currently lives in Sacramento, CA.

Retrieved from "https://batesmotel.fandom.com/wiki/Kevin_Rahm?oldid=28005"
Community content is available under CC-BY-SA unless otherwise noted.