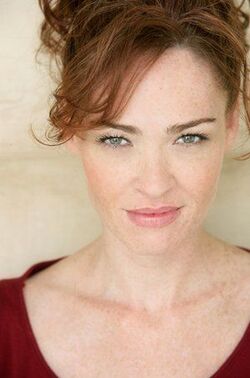 Karina Logue was born to Irish parents in Ottawa, Canada. Her siblings are sisters Eileen and Deirdre and brothers Donal (her twin and also an actor) and Michael.

She made her screen acting debut with a role in the film Liar in 1997. In 1998 she had roles in television feature A Bright Shining Lie and the series Brimstone. In 1999 she appeared in two episodes of The Practice.

In 2009 she appeared in Lie to Me and Saving Grace. In 2010 she had roles in the films The Steamroom and Taxi Ballad and the series Justified, Terriers, Bones and In Plain Sight. In Justified she guest starred in the first season episode "The Lord of War and Thunder" as Sonya Toomey. She had a recurring role in Terriers as Steph for five episodes. In 2011 she appeared in the short Tumbling, the film Sissy and the series The Whole Truth and Army Wives.

Retrieved from "https://batesmotel.fandom.com/wiki/Karina_Logue?oldid=28971"
Community content is available under CC-BY-SA unless otherwise noted.