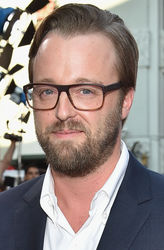 Leonard was born in Houston, Texas, the son of Joann, an author, and Robert Leonard, a theater professor. He was raised in central Pennsylvania. When he was six, he was convinced by his father to appear in plays like Life With Father. However, when he reached his teens, he decided he did not want to act. He pushed to obtain his GED at age 16 and underwent survival training with Outward Bound as preparation for a year and a half stay in Mexico where he volunteered with a youth services organization. Leonard returned to the United States and spent a year at The Evergreen State College in Olympia, Washington. He then left school again, and decided to head to Manhattan and try his luck as a filmmaker and photographer. Leonard learned his trade on the job, working as a darkroom tech at The New School for Social Research, and in the equipment room at the New York Film Academy.

In New York, Leonard found work taking portraits of musicians, and eventually landed a job as the first staff photographer for BlackBook Magazine. His career in film began soon after, when he went to work for the outré experimental and documentary film company, Mystic Fire Video. There, Leonard was involved with films with subjects ranging from famed beat poet Allen Ginsberg, to the Dalai Lama and comparative mythologist Joseph Campbell.

In 1997, he auditioned for and landed one of the three principal roles in The Blair Witch Project. Although he reportedly only earned an initial salary of $500, the experience proved rewarding in other ways as the film combined acting and photography. The film premiered at the Sundance Film Festival.

Leonard has since appeared in numerous films and television shows as an actor, including HBO's Live From Baghdad, Allison Anders' Things Behind the Sun, In the Weeds, starring Eric Bogosian and Molly Ringwald, Men of Honor with Cuba Gooding, Jr. and Robert De Niro, and the thriller Bitter Feast. He starred in the Independent Spirit Award winning 2009 film Humpday, for which he won Best Actor at the Gijón International Film Festival. Leonard has also appeared on the acclaimed HBO series Hung and the Showtime series United States of Tara.

Leonard directed the short film The Youth in Us, which was shown at the 2005 Sundance Film Festival. Art documentary Beautiful Losers followed, winning the Grand Jury Prize at CineVegas in 2008. He has also directed music videos for many popular acts, such as Morcheeba, Harper Simon, and Fitz and the Tantrums, as well as teaching directing and acting at The New York Film Academy, UC Irvine, and Academia Internacional De Cinema in Sao Paolo, Brazil.

Leonard had two Sundance favorites released in 2012. As an actor, he starred in Vera Farmiga's directorial debut Higher Ground, playing a man at odds with his wife (Farmiga). He also co-wrote, directed and starred in The Lie, a devilish morality tale adapted from the story by acclaimed author T.C. Boyle. The project, co-starred independent actors Mark Webber, Jess Weixler, and Jane Adams, and was warmly received by audiences and critics alike.

In 2014, Leonard co-starred in the drama film If I Stay, directed by R. J. Cutler and based on the novel of the same name by Gayle Forman. The film was released on August 22, 2014, by Warner Bros Pictures. In 2015, Leonard then appeared in the film 6 Years, directed by Hannah Fidell, which premiered at the South by Southwest Film Festival on March 14, 2015.

Leonard became engaged to actress Alison Pill in January 2015. They were married on May 24, 2015 following a four month engagement.

Retrieved from "https://batesmotel.fandom.com/wiki/Joshua_Leonard?oldid=28797"
Community content is available under CC-BY-SA unless otherwise noted.