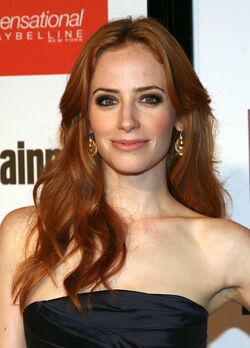 Jaime Ray Newman was born on April 2, 1978 in Farmington Hills, Michigan. She began performing at the age of eleven in the debut of Israel Horowitz's play A Rosen By Any Other Name. She worked consistently around Detroit, acting in many of the regional theaters. She received her elementary education at the Jewish Hillel Day School of Metropolitan Detroit where she starred as Ado Annie Carnes in an eighth grade production of Oklahoma!

After Hillel, she attended the private Cranbrook Kingswood School in Michigan and spent her summers at the Interlochen Center for the Arts. At the age of 16, she founded the Apollo Theater Group, serving as both producer and director. She graduated from Cranbrook in 1996. She then attended Boston University College of Fine Arts' theater conservatory for two years before transferring to Northwestern University as a drama and English major.

At Northwestern, she founded the Ignition Festival for Women in the Arts. Through that, she produced and acted in Paula Vogel's Pulitzer Prize-winning play How I Learned To Drive. While living in Chicago, she performed with her own jazz quartet. She moved to Los Angeles in September 2000.

She first made a living by performing with her jazz quartet before landing several small parts in films. She also made an appearance on The Drew Carey Show. Soon after, she landed a role on General Hospital. While there, she continued with her music career, forming a covers band called School Boy Crush. She also landed a part in the Steven Spielberg movie Catch Me If You Can, opposite Leonardo DiCaprio. In 2003, she starred in the play Turnaround, Roger Kumble's dark Hollywood satire.

In 2006, she began an eight-episode run in the acclaimed CW show Veronica Mars. She became a fan favorite with her appearance on Stargate Atlantis. Along with fellow Stargate actor Michael Shanks, she appeared in the Christmas 2006 television film Under the Mistletoe. Other high-profile guest starring roles include E-Ring, Heroes, Supernatural, Related, CSI: Crime Scene Investigation, Medium, NCIS, Grimm, CSI: NY, and Castle. In 2007, Newman starred in Neil LaBute's play Fat Pig at the Geffen Playhouse, and in 2008, starred in LaBute's play Some Girl(s), also at the Geffen. The following year, she appeared alongside Rebecca Romijn, Lindsay Price and Paul Gross in the 2009 television adaptation of Eastwick (based on the John Updike novel The Witches of Eastwick). In 2010, she held major recurring roles on Eureka, and on Drop Dead Diva.

In January 2011, she acted onstage in a revival of The New York Idea by Langdon Elwyn Mitchell. In 2013, she starred in the American premiere of the Australian play The Gift at the Geffen Playhouse. The same year, she starred with Radha Mitchell in ABC's midseason drama Red Window. She also starred in the independent psychological thriller Altered Minds. In 2014, she guest starred in an episode of TNT's comedy-drama Franklin & Bash. Later, she was cast as series regular in another ABC series, Mind Games.  The same year, it was announced that she would recur on Amazon Studios' procedural drama Bosch. In August 2015, she joined the cast of ABC crime drama Wicked City.

Newman married Israeli-born writer and director Guy Nattiv on April 2, 2012 in Tel Aviv, Israel.  In March 2013, Newman announced she was pregnant with the couple's first child. She gave birth to a daughter in August 2013.

Retrieved from "https://batesmotel.fandom.com/wiki/Jaime_Ray_Newman?oldid=29011"
Community content is available under CC-BY-SA unless otherwise noted.