"Hidden" is the fourth episode of the final season of Bates Motel and the first to be directed by Max Thieriot. It aired on March 13, 2017.

Norman learns who he can rely on as he attempts to protect his secrets; Romero struggles to find safety.

As Norman and Chick look at Caleb's motionless body on the road, the former is conflicted over suggestions being thrown at him by "Mother" and Chick over what to do with the body. However, Chick decides to take the body away in his trunk. Meanwhile, Romero tells the boy who shot him to run into his house to grab a first aid kid, which enables him to flee.

The following morning, Chick gives Caleb a Viking funeral on the lake while the new sheriff, Jane Greene, arrives for work to be told that the DA is on the phone to discuss Jim Blackwell who skipped out on his parole. While Norman is busy removing items from the house, which include Norma's dresses, the sheriff pays him a visit to tell him about Jim Blackwell, revealing that he was in the same prison as Romero, who has escaped. She wonders why Blackwell would be interested in the house or motel but Norman says he is not sure. After she leaves, he asks "Mother" about why Blackwell possibly had the address but "she" says he could have been looking for a place to stay.

Norman heads to the hardware store and Madeleine gives him his delivery of shower curtains. He decides to give her Norma's old dresses as he believes she will put them to good use. When he arrives home, Chick is preparing to move his belongings in but Norman tells him it is not a good idea and that he should leave. Meanwhile, Romero makes it all the way to a block of apartments and phones the paramedics, giving a fake name and saying that his neighbor overdosed. When they arrive, he gets into the ambulance and takes some supplies before going somewhere to tend to his wounds.

That evening as Norman is closing up the motel office, the sheriff calls by and asks if she can look at the guestbook. Norman mentions that they get a lot of guests from Canyon City and tells the sheriff she mentioned it when she first visited but she does not remember mentioning it. She gives him the plate number of his car in case he sees it and leaves. Afterwards, he questions "Mother" and "they" head into the woods to find it but argue about how to dispose of it. When he tries to choke "her", "she" tells him not to do it again.

The following morning, Madeleine phones Norman to thank him for the dresses saying they fit perfectly and invites him over for dinner since Sam is out of town on business. Norman then pays Chick a visit to apologize for telling him off and notices the typewriter. Chick says he is writing a true crime novel and Norman asks him for advice on how to dispose of a car. Chick tries to question him further but Norman says "Mother" is out of control and leaves.

As Norman prepares to leave the house that evening, he talks to "Mother", saying he does not need "her" protection from Madeleine and that he will take care of Blackwell's car. Elsewhere, Romero makes it all the way to Maggie Summers' house to ask for help. When Norman arrives at Madeleine's house, he is shocked to see her wearing Norma's blue and white floral dress. Madeleine says she feels stupid for wearing it but Norman says it is fine and is glad she found a use for it. After they finish dinner, she suggests making a cake and they kiss but he gets a fright when he sees "Mother" slashing Madeleine's throat and the latter lying dead on the floor. In a panic, he flees the house and arrives home to a dark empty house. After composing himself, he stares ahead of him. 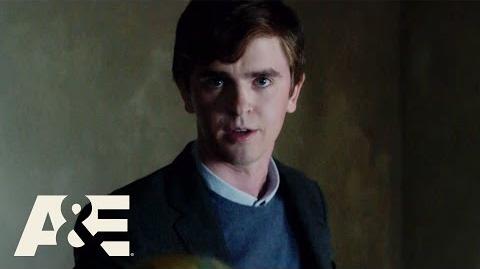 Retrieved from "https://batesmotel.fandom.com/wiki/Hidden?oldid=27695"
Community content is available under CC-BY-SA unless otherwise noted.