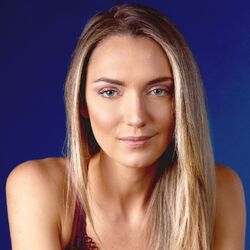 She is well-known for her roles in Siren as Janine, and in The Magicians as Victoria.

Hannah grew up in Australia where she began working extensively in theatre. A keen storyteller, Hannah completed her Masters in Screenwriting and Directing at the University of Sydney.

She marked her foray into film with the award-winning feature, The Horseman, as runaway teenager, Jesse Forteski. The Horseman won several awards at various Australian film festivals and screened at world-wide festivals, including SXSW, among others.

Hannah has appeared on a number of popular shows including, Supernatural, Colony, Bates Motel, and The Returned.

Retrieved from "https://batesmotel.fandom.com/wiki/Hannah_Levien?oldid=29452"
Community content is available under CC-BY-SA unless otherwise noted.