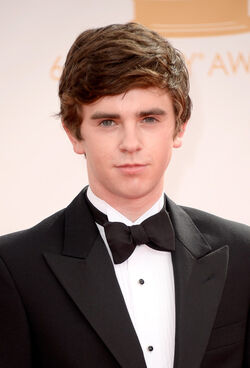 Highmore was born on February 14, 1992 into a show business family. His mother, Sue Latimer, is a talent agent whose clients include actors Daniel Radcliffe and Imelda Staunton, and his father, Edward Highmore, is an actor. He has a younger brother named Albert ("Bertie"), born in 1995. Highmore's home is in Highgate, an area of North London.

Highmore was educated at a primary school in Hampstead Garden Suburb in Hampstead in North London, and at Highgate School, an independent school for boys in Highgate (also in North London), followed by Emmanuel College at the University of Cambridge, where he studied Spanish and Arabic. He graduated with a BA in 2014.

He made his acting debut at the age of 7 in the movie Women Talking Dirty in which his brother Bertie also appeared and two years later played a young King Arthur in the TNT minseries The Mists of Avalon as well as the son of a bus driver in the BBC miniseries Happy Birthday Shakespeare. He acted alongside his father Hallmark Entertainment's TV movie Jack and the Beanstalk: The Real Story.

In 2004, he made his breakthrough in the Oscar-winning semi-biographical film Finding Neverland, playing Peter Llewelyn Davies, the troubled son of widow Sylvia Llewelyn Davies and the inspiration for J.M. Barrie's Peter Pan. He received several awards and nominations for the role, including the Critics' Choice Movie Award for Best Young Performer and an SAG Award. That same year, he appeared in the family adventure film Two Brothers and fantasy film Five Children and It.

The following year he was reunited with Finding Neverland co-star Johnny Depp and Women Talking Dirty co-star Helena Bonham Carter for Tim Burton's adaptation of the Roald Dahl novel Charlie and the Chocolate Factory in which he portrayed lead character Charlie Bucket. It was reported that Johnny Depp had recommended him for the role after being so impressed with his work on Finding Neverland. For the second consecutive year, he was awarded the Critics' Choice Movie Award for Best Young Performer and also won the Saturn Award for Outstanding New Talent.

In 2006, he appeared in the films A Good Year, animated fantasy film Arthur and the Invisibles as well as its sequels in 2009 and 2010 respectively. During this time, he also engaged in voice acting. In 2007, he appeared portrayed the title character in the film August Rush alongside Keri Russell and Robin Williams.

The following year he appeared in the children's fantasy film The Spiderwick Chronicles, taking on the roles of American twins Simon and Jared Grace. He provided his vocal talents once more for the video game of the same name and films A Fox's Tale and Astro Boy as well as the latter's video game.

He played the lead role in the BBC TV movie Toast, where he was reunited with Helena Bonham Carter once more. In 2010, he starred opposite Ving Rhames in the drama film Master Harold... and the Boys and in 2011 starred opposite Emma Roberts in romantic comedy-drama The Art of Getting By, where he again had to use an American accent.

Throughout his time on "Bates Motel" he was nominated for several awards, including two Critics' Choice Awards, and finally won his first award in 2017 at the People's Choice Awards.

Retrieved from "https://batesmotel.fandom.com/wiki/Freddie_Highmore?oldid=28845"
Community content is available under CC-BY-SA unless otherwise noted.