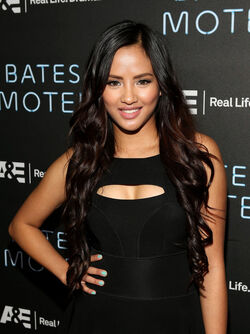 In May 2009, Estrada competed in the 2009 Beat Music Awards hosted by Vancouver's The Beat 94.5. and won the competition. Her single, "Get Down" debuted on July 2, 2009 on the Kid Carson Show, again on The Beat 94.5. The single was nominated in the Dance/Urban/Rhythmic category of the 13th annual Canadian Radio Music Awards, which recognizes new songs that secured the most airplay on Canadian radio stations as recorded by Nielsen Broadcast Data Systems.

In May 2009, she released her first single "Get Down" with RockSTAR Music Corp after winning The 2009 Beat Music Awards. even though she was not signed to the label.

She was a member of the girl group G.R.L along with Natasha Slayton, Lauren Bennett, Paula Van Oppen and previously Simone Battle, from 2013 until 2015.

Retrieved from "https://batesmotel.fandom.com/wiki/Emmalyn_Estrada?oldid=28865"
Community content is available under CC-BY-SA unless otherwise noted.