"Dreams Die First" is the fifth episode of the final season of Bates Motel and the third to be directed by Nestor Carbonell. It aired on March 20, 2017.

Norman wakes up alone in his mother's bed and runs to the bathroom to throw up. While washing up, he sees marks on his shoulder but has no idea where they came from. Going downstairs, he finds no trace of his mother, either in the house or down at the motel, or the car. He finds a matchbook from a bar called "The White Horse" and Sheriff Greene phones to ask if he can come down to the station to talk some more about Romero. When he gets there he badmouths him again but the sheriff believes he has some unfinished business and that is why he escaped.

At their house in Seattle, Emma comes across her mother's earring while searching a drawer for stamps. Since she still believes it belongs to Norma, Dylan decides comes clean about the reason why he no longer contacts his mother - Norman is sick and she refused to get help for him. He also reveals that Norman was with Blaire Watson the night of her murder and because of this he feels something may have happened to Audrey since she never checked out of the motel when she came to town. A shocked Emma orders him to go for a walk as she needs to be alone to digest this information. While he is out, she looks through his laptop and comes across an article stating that Norma committed suicide over a year ago.

Elsewhere, Sam is having a rendez-vous with a woman named Marion. She knows that he is in debt but he when she suggests marriage he tells her White Pine Bay would not suit her. She shows up late to work and is ogled by a client when she asks her boss to sign some forms. The man gives her a briefcase filled with $400,000 to hold and when he leaves she asks her boss if she can possibly have Janet's job since the latter will be leaving but her boss refuses as she does not have the correct qualifications. He asks her to deposit the briefcase full of money for him. However, she opts to switch the money to a suitcase and goes on the run with it. On a remote stretch of road she is stopped by a state patrol officer who asks to see her license and registration, before telling her that she was stopped as her coat was hanging out of the trunk. He fixes it for her and allows her to continue on her journey.

Back at home, Norman phones the bar to ask about his car and also if a woman named Norma was there the night before. Madeleine also phones and offers to drop him off at the bar. However, Norman ultimately reveals that Sam was with another woman at the motel and that Madeleine should talk to him. She angrily tells him to get out of her truck as she drops him at the bar and drives off. When he enters the establishment, he is confused when the bartender appears to recognize him but he takes the keys to his car. While reversing, he notices a pair of lacy red underwear on the backseat. As he drives through town and is stopped at a set of traffic lights, he sees Gregg Edwards, who signals to him to meet him for coffee in a local coffee shop. They talk about the fact that Norman has stopped his therapy sessions and the doctor says he knows Norman has not been on his meds since he has not received an updated prescription in over a year. Enquiring about Norma, Norman lies and says that she is fine but the doctor asks him if he remembers that he tends to see things that are not really there. With tears in his eyes, Norman cuts their meeting short and leaves.

A freaked out Marion calls Sam while he is having dinner at home with Madeleine. She has reached White Pine Bay and wants him to meet him since she is in a spot of bother. She suggests meeting at his place but he lies, saying that his roommate does not allow guests. Unfortunately, when he gets off the phone Madeleine confronts him asking who "she" is and he realizes that she must know of his affair.

Meanwhile, Norman returns to the bar and is confused when so many of the patrons recognize him. As the bartender pours him a drink he tells him to take it easy since things got a little wild the previous night. Norman then runs to the restroom and is approached by an attractive man who also recognizes him and attempts to seduce him. He starts to have a panic attack when he visualizes the man and "Mother" having sex in the car the previous night. He flees the bar in the pouring rain and heads straight home where he finds himself all alone. At that moment, Marion sees the sign to the motel and decides to pull in to the parking lot. 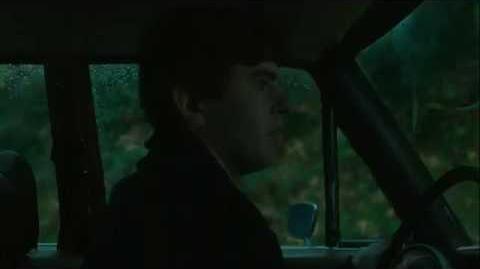 Retrieved from "https://batesmotel.fandom.com/wiki/Dreams_Die_First?oldid=30766"
Community content is available under CC-BY-SA unless otherwise noted.