A mysterious stranger causes problems for Norma; Bradley is not happy when rumors spread at school; Dylan and Remo go on a fateful road trip; Norman takes up a grisly hobby.

Emma's father, Will, teaches Norman taxidermy after Norman takes his dead dog to him. Norman's school principal calls Norma about Norman's recent behavior. Norma agrees to have Norman meet with a psychologist, who suggests Norma herself may have control issues over her son.

Bradley is upset that Norman told Emma they had sex, calling it a mistake. Norman is angry that Emma told Bradley's friends he and Bradley had sex; Emma explains she was sticking up for Norman because Bradley's friends were saying Norman would never have a chance with Bradley.

Jake reveals to Norma that he knows the full story about Shelby and Keith Summers and she later kicks Jake out in retaliation. She meets the trimmers Dylan had picked up earlier and gives them all rooms at the motel. She decides to take Dylan out to dinner to thank him for bringing new customers, but is horrified to see the autopsied corpse of Zack Shelby on her bed. 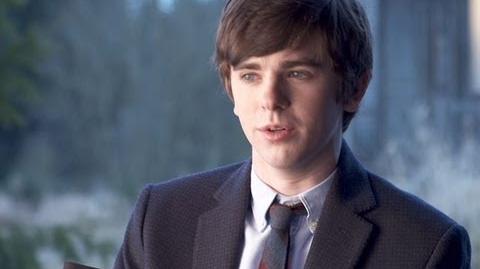 Bates Motel Inside The Episode A Boy And His Dog (S1, E8)

Retrieved from "https://batesmotel.fandom.com/wiki/A_Boy_and_His_Dog?oldid=32792"
Community content is available under CC-BY-SA unless otherwise noted.